Patigul Ghulam – “I don’t have a gun, I have only my mouth and my tears, and you cannot control them.” 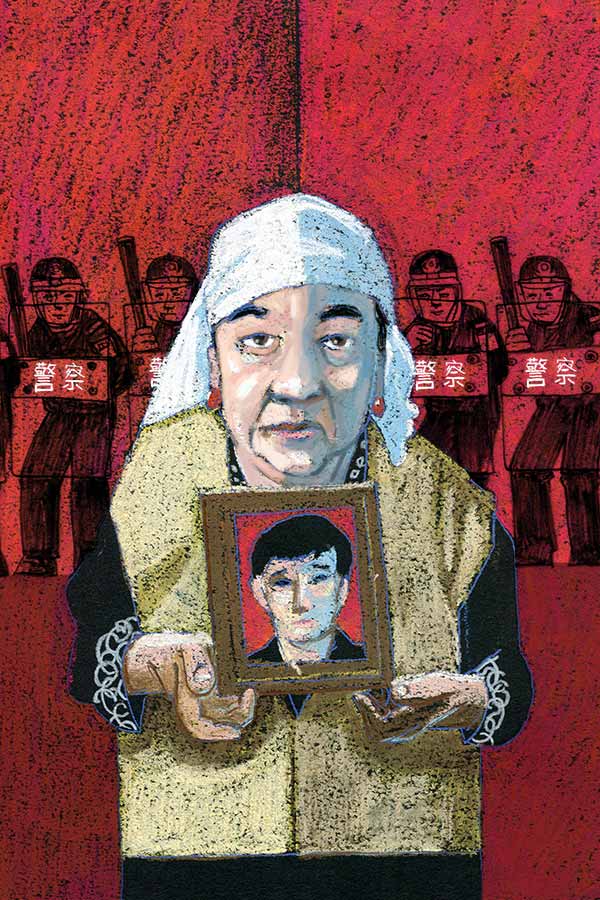 The following is the translation of a Chinese language blog published by the Uyghur Human Rights Project on February 16, 2016. According to Radio Free Asia, Patigul Ghulam faces trial in April, 2016.

Patigul Ghulam is a mother unwavering in her commitment to find her missing son who disappeared after the “July 5 incident.” It is well known that hundreds died and thousands were injured in the “July 5 incident,” which brought untold suffering to the Uyghur people. In addition to the hundreds who died and thousands injured, during and after July 5, 2009 many Uyghurs were arrested and disappeared and have not been heard from since.

On July 5, 2009, Uyghurs peacefully gathered in Urumchi’s People’s Square to protest the government’s inaction in Shaoguan, Guangdong Province, after a deadly attack on Uyghur workers there. Details of that day and the following months are still unclear today. What is clear is that the events in Urumchi caused an untold number of casualties and unprecedented unrest. Eyewitness accounts of the July 5 events in Urumchi documented in a report by the Uyghur Human Rights Project as well as human rights groups including Amnesty International confirm instances in which Chinese riot police shot and killed peaceful Uyghur protestors.

At that time, brave Uyghur mother Patigul Ghulam’s son Ali was 25 years old, and seven days after the major unrest of July 5 (around July 12), police took him away. Ever since her son was taken, she has appealed to authorities, and searched everywhere for her son, to no avail. Throughout her search process, Patigul has suffered countless insults and unreasonable treatment by the local authorities.

According to Radio Free Asia, on May 27, 2014 the Urumchi Public Security Bureau detained Patigul on the grounds that she “aided hostile forces to publicly vilify the government.” An anonymous neighbor of Patigul who is familiar with the situation gave an account to Radio Free Asia’s Uyghur Service, citing Patigul’s daughter. The neighbor said that after a bombing incident at an Urumchi fruit market on the morning of May 22, 2014, the Urumchi police detained Patigul on May 27 on charges of “aiding hostile forces to publicly vilify the government,” though the police never explained what her illegal behavior actually was. Patigul’s daughter protested the police conduct, but she was threatened that if she continued to attract public attention and cause trouble, she would be found guilty of the same crime as her mother.

Because of her son’s disappearance after his arrest by police, Patigul has spent years protesting to the local authorities, demanding an explanation, and actively appealing to overseas media. Based on reports, nine months after her son’s arrest, she heard directly from another prisoner that Ali had been tortured and was hospitalized. Thereafter she did not receive any further information about her son.

According to investigations by Uighurbiz and other independent websites, after the “July 5 incident” the Chinese authorities arrested 1,800 Uighurs – some were sentenced to death; some were sentenced to life imprisonment; some were released; and many went missing, and their whereabouts remain a mystery today. Based on the understanding of overseas Uyghur groups, seven years later the family members of those who disappeared have been subject to long-term pressure and monitoring.

As one among hundreds of mothers who lost their sons and daughters, Patigul’s experience showcases the inhumane treatment that the Chinese Communist Party (CCP) adopts towards Uyghurs like her. It is suffering enough to lose close relatives and sons or daughters, and to “add fuel to the fire” by further abusing a woman with nowhere to turn is simply inhumane. Nevertheless, as Patigul has said, “I don’t have a gun, I have only my mouth and my tears, and you cannot control them.” No matter how the CCP tramples the freedom and rights of the Uyghurs, the CCP government is powerless to cover up the “mouths” of the Uyghur people even after its long-term forceful oppression, their “tears” cried for freedom, or their perseverance in the struggle for their future.