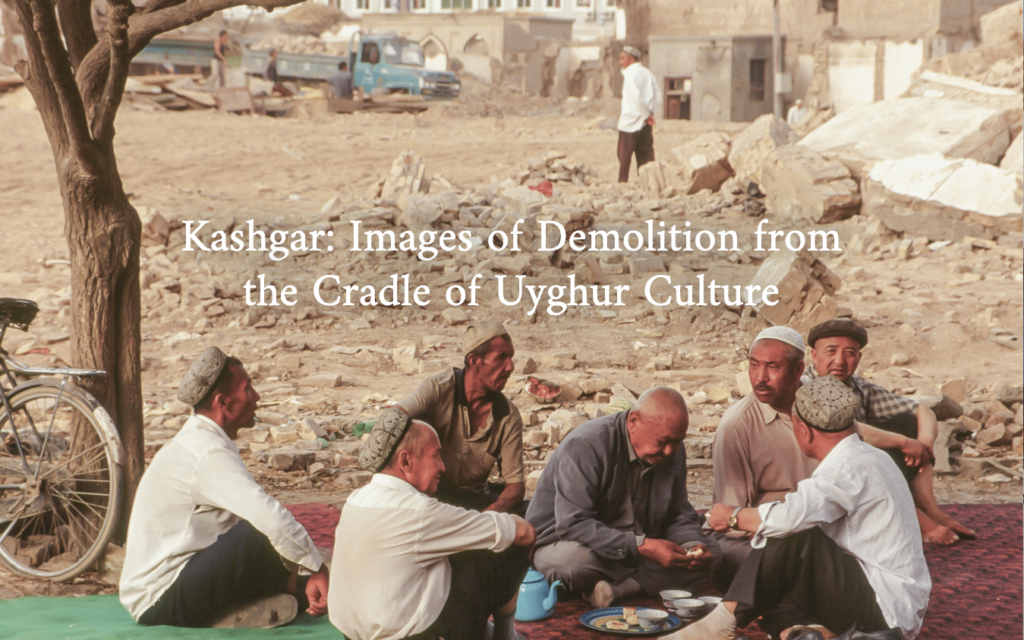 The Uyghur Human Rights Project’s new photo essay, Kashgar: Images of Demolition from the Cradle of Uyghur Culture, documents the partial demolition of the Uyghurs cultural capital in 2003.

The essay features evocative photographs of the destruction of Kasghar’s old city. Werner Haug, a Swiss photographer and sociologist, took the images on a visit to the city in 2003. The essay includes Mr. Haug’s recollection of his trip, as well as responses to the photographs by four Kashgaris, born-and-raised residents of Kashgar now living in the diaspora.

As part of the memory project, UHRP also presents a visual timeline of the Chinese authorities’ repeated demolitions of Uyghur homes, businesses, and mosques in Kashgar’s old city from the 1980s to 2015.

“Kashgar old city is one of the most important spaces of Uyghur identity, religion, and learning,” said UHRP Executive Director Omer Kanat. “The buildings of the old city held the history and soul of the Uyghur people. The area was a refuge from the repression of the Chinese state, where Uyghurs could preserve and innovate their distinct culture.”

Writing about Kozichiyar Béshi, the last untouched portion of the old city at the time of his visit, photographer Werner Haug writes, “In 2009, this portion of the old town would become the target of the next and largest demolition, resettlement, and reconstruction campaign of the Chinese Party-state in Kashgar. Carried out with heavy involvement of police and security forces, by 2012 the campaign had affected almost 90% of the old town, tens of thousands of Uyghur households. In hindsight, the events of 2003 were only the prelude.”

In 2009, the Chinese government announced its intention to raze up to 85% of the old city, unique for its centuries-old, interwoven, fractal mud-brick buildings. In response, a host of international organizations voiced their grave concern at the potential loss of priceless architectural heritage, including UNESCO and the European Parliament. Large-scale demolitions went ahead, nonetheless. UHRP documented this phase of demolitions in its 2012 report Living on the Margins: The Chinese State’s Demolition of Uyghur Communities.

In 2020, UHRP published Kashgar Coerced: Forced Reconstruction, Exploitation, and Surveillance in the Cradle of Uyghur Culture, which found Kashgar transformed into a simulacrum for tourists as well as a new breed of totalitarian “smart city” optimized for ethnic repression.

Using vivid images accompanied by the words of Kashagris, this photo essay serves as a memory project of an old city now disappeared. Further, UHRP highlights the drawn-out process of destruction of Uyghur neighborhoods, sacred places, and spaces of business.

Dr. Elise Anderson, Senior Program Officer for Research and Advocacy at UHRP, compiled and edited the project. She noted that the photos and discussion help to put ongoing policies into historical perspective. “These photos and accompanying essays show how the Party-state’s destruction of Uyghur culture predates the latest policies rolled out since 2016,” she said. “In reality, the Party-state has been marginalizing Uyghurs for decades.”

Uyghur writer and researcher Abduweli Ayup notes in his essay, “Kashgar is the pride of the Uyghurs. The demolition of its old city is a testament to how our most revered places have been fully exploited. It is a testament, too, to the destruction of our honor. It is a great tragedy for us.”

Mr. Kanat added, “It is no surprise that the Chinese government has torn the heart out of the old city given the ongoing genocide of the Uyghur people. In the minds of Chinese officials, all demonstrations of Uyghur identity, including architecture, must be crushed to achieve their goal of complete assimilation.”